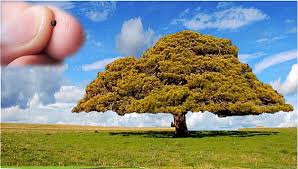 26 He also said, “The kingdom of God is as if someone would scatter seed on the ground, 27 and would sleep and rise night and day, and the seed would sprout and grow, he does not know how. 28 The earth produces of itself, first the stalk, then the head, then the full grain in the head. 29 But when the grain is ripe, at once he goes in with his sickle, because the harvest has come.” 30 He also said, “With what can we compare the kingdom of God, or what parable will we use for it? 31 It is like a mustard seed, which, when sown upon the ground, is the smallest of all the seeds on earth; 32 yet when it is sown it grows up and becomes the greatest of all shrubs, and puts forth large branches, so that the birds of the air can make nests in its shade.”

33 With many such parables he spoke the word to them, as they were able to hear it; 34 he did not speak to them except in parables, but he explained everything in private to his disciples.

Have you ever started something and then given up on it? It happens a lot to us as kids. We begin to do something find out it takes some serious work or effort and decide to go a different direction. Sometimes we make several attempts, but we run out of steam. One thing for me is I always wanted to learn to play the guitar. I tried when I was a kid asking Santa for a guitar and then trying to play it. They had these teach yourself books back in the day and I would get the guitar and the book. I would look at the pictures and then down the neck at my hands on the string. I would strum the guitar and it would make a noise but not usually very good. Then I would adjust and try again and eventually I could get a decent sound. Then I would go to the next chord. It seemed tedious and then when I had learned three chords they would have you do an exercise or a simple song. I kept getting the chords mixed up. I quit after a short time. Then I had a friend who I taught with that played and was willing to teach me. He worked and worked with me. But I was working and helping to chase kids, the time was just not there and by the end of each lesson my fingers were hurting from pressing the strings too hard. I again ran out of excitement and still can’t play the guitar.

Learning Spanish was another dream of mine that has fallen by the wayside from trying to teach myself. Meditation and Yoga didn’t do that very well either my body wouldn’t bend that way and it was hard to focus on relaxing when I was in pain. It seems hard for us to follow through on things when we are left to our own will to carry through. So many times, it seems like we have good intentions we just stink at the follow through. Our faith is one of those things as well.

We have good intentions, but we get busy and we let life keep us from growing our relationship with God. We are pushed to do so many things in our daily lives that we are strapped for time. And yes, we could get up earlier to do our daily devotions or not watch TV or read our favorite books or social media or whatever you do to indulge yourself. But the truth is we need those times as well. Those are our sanity moments and we need to maintain some semblance of keeping it all together. Being a Christian is more than just a call, but what can that look like?

King David was one of the greatest kings ever. He was the one anointed by Samuel and made the most ground in uniting the tribes of Judah. Now Saul was the first king that the people wanted. But he was too full of himself and refused to spend time with God, he went off and did his own thing and made treaties and alliances with no good people. He taxed the poor and the rich got richer. He and his boys were sexual deviants and did not respect humanity at all. So God said, I’m done with you Saul. He sent Samuel to find the next king that God had already picked this time. He was done with the electorate so to speak and he was going to get a good one.

Samuel shows up to this town called Beth-lehem, in which God directed him to. He was told to deceive old Saul by saying he was going to give them a blessing, burn some cows in an offering and pick the new king all under the guise of worship. God tells old Samuel that there is going to be a man there named Jesse who is the grandson of Ruth and Boaz and one of his sons is going to be the new king.

When he gets to Beth-lehem, he asks Jesse to bring his sons to church so that they can worship. Jesse introduces each son beginning with the oldest. Samuel sees Eliab the oldest and thinks here is a fine one to be king, but God says nope. The next one Abinidab God says nope. Next on the parade list is Shammah and God takes a pass on him as well. Seven sons came before Samuel and God passed on them all. Now Samuel is freaking out he says to Jesse do you not have anymore sons? Jesse says well there is my youngest David, but he is out tending the sheep.

They go and get David and he shows up looking a little worse for wear. He has a ruddy complexion which means his cheeks were red probably from being in the desert sun and wind his hair was tussled and he had a stink that lasted for days. But God said to Samuel, this is the one. Samuel anointed him on the spot. God could have said that’s good we have our king and killed Saul off. But the call was just the beginning. From here on out his life would be different but he was not yet ready to lead. No, he had to go and play the harp for the crazy Saul and learn about a good and a bad ruler. He had to get his reputation out there by killing some giant named Goliath, he had to show ultimate loyalty to a friend named Jonathan and he had to run from the crazy Saul who was extremely paranoid with good reason, all before he ascended the throne.

David the least likely on the outside had a heart for God and God knew his heart from the beginning. David was not perfect either. He had that thing with Bathsheba and killed her husband and tried to kill his own son when they got into a fight, but David always returned to God and God grew David’s faith. When he started out he had just a little faith, but it seemed to grow pretty big in his lifetime. His actions whether good or bad spoke for themselves.

The parables that Jesus tells us about in our gospel lesson is how our faith is as well. When we are called, and it is God who does the calling, and we say yes, we are just beginning our life of faith. It does not end with the call or the baptism, it begins at that moment. What are we going to do from there? The faith we have been given is like the seed on the ground or the mustard seed in the parables. They are both representations of the kingdom of God. When we receive the call and act on it we are representations ourselves of the kingdom of God. That seed that has been placed inside us that nugget of the Holy Spirit is now ready to grow. But what are we doing with that seed? Are we allowing God to make it grow within us through our thoughts and our actions or do we toss it aside because we think we know better like King Saul?  When we mess up which we are going to do quite often do we repent of our ways and seek the will of God in our lives. Do we strive to help others and pay it forward? Are we trying to learn more about our faith or do we get distracted and our fingers hurt too much from pressing on the strings too hard? Are we going through the motions of our faith and not letting the seeds grow to maturity? When the head ripens we have to be willing to harvest. When the mustard seed is planted we have to make room for the size of the tree that can grow in our hearts. I am convinced that the smallest amount of faith can do remarkable things if we allow God to work in our lives.

The goal is to allow God to grow the seeds within us. If we take the seed and never do anything with it, we keep it in a jar and never plant it then we are never going to understand what a life of faith is. There is going to be bad and good times, ups and downs, yet we know that through it all God is walking with us, growing and tending that seed into the kingdom. You are the best representation of the kingdom there is. Live it fully and rejoice in the name of the Lord. Amen.